On 1 June 2017, I left the small Cornish town of Falmouth to hitchhike around the world.

“Your mother is right, kids. Brush your teeth!” 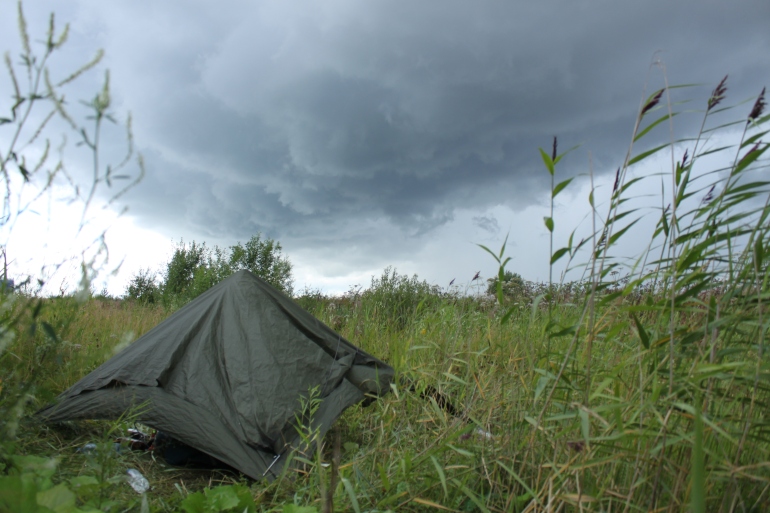 Before leaving on this adventure, I needed to have a dental check-up. I’ve had a fear of the dentist since a root-deep filling went wrong 4 years before and because of this I hadn’t been for all of that time. My mother always used to tell me, “take care of your teeth, or they’ll fall out!” I never really believed her.

The appointment was arranged for 2 months before the leaving date. Enough time, I thought. It led to another deep filling, which seemed to be the end of it, but as the anesthetic began to wear off I knew something was wrong. Over the next few days the pain became unbearable and I had to call in sick to work. I thought it might settle on its own though and I didn’t want to phone the dentist again, in case they told me something I didn’t want to hear.

I lasted about a day of keeping it to myself. They said that I now needed “root canal treatment” which would take “at least month and cost around £600”. The money wasn’t the real problem here, the time was. I chose my June leaving date so that I could get through Russia before winter. The whole trip was now looking to be a failure before I’d even left England.

I decided to bury my head in the sand again and leave in the hope that it would get better on its own. Who knows, maybe the experienced medical professional was wrong.

I was making excellent progress too, already reaching the end of the UK on the third day. I was almost ready to make the final distance to the ferry port to France, but I was now in too much pain to think about anything else. It was like a little girl screaming right into my ear. It was all I could focus on. Sometimes the pain did go away but whenever I was starting to enjoy this trip, it would come back.

The sobering realization came to me that, as I went on, the further from quality dental treatment I’d be. Something had to be done.

The trip was now, in the first few days, hanging by a half-sliced piece of string. Best case scenario I would be delayed by a week, worst case it could be months and using NHS services often involves long waits.

And where would I stay? There were no cheap hostels in this part of the country. I sent a message to all of my friends who lived in the area, but nobody could take me in. Would I camp for this unknown amount of time? Would I endure not only the pain of a swollen root, but put up with being smelly, cold and uncomfortable too?

Luckily my old job at a residential outdoor activity center, which I’d left a week ago, had kindly agreed to let me stay for free in a guest room. That was one less thing to worry about. I was just 15km from the place and I was committed to staying with my ‘never-paying-for-transport rule.’ I could have taken a bus and returned to the same spot, but the trip was barely surviving as it was and if I did this, that would have meant it falling apart.

So with that, I trudged through the light, British downpour for 6 hours. The cold discomfort and aching feet were a nice distraction from the shooting pain inside my mouth. I got there on a Friday night and as I lay in bed waiting for the dentist office to open on Monday I thought up the available options:

2- Postpone the trip until next year;

3- Following dental treatment, rush the first part of the trip (I already had the Russian visa issued and I would have to cover the rest of Europe in a matter of weeks); or

4- Have the tooth taken out

Option 2, I really couldn’t face. Not because of the embarrassment of leaving on a huge trip I’ve been telling everybody about for the past year only to make it as far as my workplace, it was because I would have hated myself for failing a once-in-a-lifetime-trip due to taking bad care of my teeth. Postponing for another year could mean never doing it at all. Who knows, maybe I’d get comfortable? Maybe accidentally start a family? No, it had to be now. There was only one other option: have the tooth taken out.

We always know when something is wrong for us, it stays in the back of our mind and slowly nags at us as we continue to ignore it. Having the tooth taken out was the wrong choice and I knew it deep down, but I wouldn’t let myself think it.

As Monday approached I finally said it out loud and the pressure of the problem eased. This allowed me to come up with a fourth idea: depending on how the treatment went, I could still continue the trip but at a slower pace. I could spend more time in Europe and when winter passed I could continue with the original plan. This option became the favorite. I called the dentist’s reception desk and got an appointment for Thursday morning.

The time went very slowly inside my temporary room. All of what I had been through over the last half-week had worn me out and I slept 9 hours every night, plus 3 hours some afternoons. How the hell was I going to last to the other side of the planet?

Everyone I used to work with was walking past the closed curtains. I didn’t want to see anyone. I was a brave adventurer now! But all I had done so far was make it as far as here. I did venture out after a few days though, which further weakened the feeling of my journey continuing.

On Thursday morning, I had the first meeting with the dentist. I walked in feeling hopeless, but also relieved to finally be confronting the issue.

I voiced my concern, asking “Do you know how long will it take?”

He started working right away, removing the root and putting a temporary filling in place. After 30 minutes, he said “come back in 6 weeks, Mr. Day.”

“Is there any chance you can do this a bit quicker? I have a flight to catch next week.” I asked, half-desperately.

“Oh, if that’s easier, come by tomorrow morning and I’ll finish it off.”

And it was that easy. Within a week, I’d dealt with my first problem of the expedition. The stories other people had told me might have been true, but I had gotten lucky. Very lucky. The root canal treatment was quick and painless and he even did it for free!

Your mother is right, kids. Brush your teeth!