I woke in the early afternoon and sat up in my sleeping bag, admiring the emerald-green countryside with its buttercup-yellow fields as I ate the last of my food scraps. I took a few hours to myself in my tiny bubble of ignorance, attached to a much larger one which was the real world. Hunger crept back in before too long, but I ignored it; I didn’t want the simplicity of this moment to end.

I had to leave eventually though. There were no shops nearby, nor was there good place to hitchhike. After about 20 minutes of walking, my legs began to operate on reserve energy.

I found a bus stop at which I waited for a very little amount of time before a man named Timo stopped and took me the whole 100km to Tallinn.

He spoke English well enough to have a good conversation with me – He was a family man and on his way to get the ferry to neighboring Finland, where he works for 6 months of the year, makes a lot of money in the stronger currency and then returns home for the remainder of the year to spend with his wife and children.

he left me in the capital, but I wouldn’t stay to explore it. I would need to be back in a few days to pick my passport up anyway, and I had already arranged with a Couchsurfing host to stay for 3 nights in a small village halfway to the Russian border.

All I had to do now was find some food and a place to camp for the night. I bought a baguette of garlic bread and a liter of strawberry milkshake which went down like a fat person tripping over.

Finding somewhere to camp in a city is never easy, but fewer than 4km away from the center, I found an overgrown area of land which looked as if it had once been set aside for another tower block.

The following description of that night in my tent might paint for an awful image for some, but I truly enjoyed it, as I do every aspect of this adventure. I wrote in my diary under my not-completely-secure mosquito net with about 20 of the little bastards sitting on it, waiting for me to make a mistake – I couldn’t keep the net tucked under my sleeping bag and be comfortable at the same time; I tried lying sideways and writing which made my hand go numb, then I tried sitting up which pushed some of my bare skin against the net. The most comfortable position I found was lying on my back, but this caused the pen to stop flowing. I settled on the last one, but sitting up a bit – painful on my stomach after a while, but it was the lesser of three evils.

The next morning, nature called and I had no toilet paper with me. All I could think of was my bag of dirty clothes, which luckily contained a pair of socks beyond repair.

The next thing I did was slightly less disgusting. Dumpster diving is a great way to travel for free, and now that I knew the journey was going to take longer than I had budgeted for, I had to make changes.  I found a supermarket with unlocked bins – there were people watching, but I didn’t care anymore. I found more sandwiches in them that I knew what to do with. They had been thrown out that day and were still sealed. 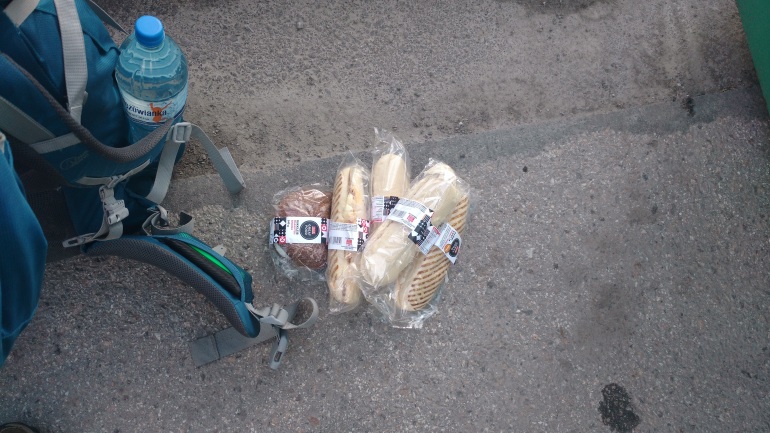 I filled my backpack up to the brim and opened one to eat as I walked; it was no different to the paid version. I’m not an activist, but I think the amount of food we throw away is quite terrible.

At the main road again, I caught a car within one minute of putting my thumb out – one of my easier hitches. Elar was a 28-year-old camera man and we had a great conversation about relationships, travel and food. He gave me some ice cream, and I thought about giving him a sandwich, but I didn’t want to tell him where it had come from. He took me to a bus stop just outside my Couchsurfing host’s house where I waited for him to be free.

I didn’t tell Marko that I was waiting for him in the bus shelter, because the wooden panels prevented me from seeing around me and I was worried he would scare me. He knew I was there and, of course, I shat myself (metaphorically, not like earlier in this blog). He seemed to be excited to tell me something…

After we exchanged the regular niceties that you do when you meet a new person – especially one whom you are going to be spending the next few nights with – he told me that the man who had just dropped me off was one of his best friends who did not yet know the new address.

According to him, everyone is connected through a mutual friend in Estonia, if they are not already friends; it is a small country with a small population.

Marko looked typically Eastern European, with his bleach blonde hair blue eyes. He had a very soft voice and a slender build. He led me to his house – a cute wooden 1950’s home which he inherited from his grandparents. What I wouldn’t give to be given a dream house like this – it was perfect! He showed me to my room and we conversed over a cup of tea. I felt safe, relaxed and happy there. And what was to happen over the next few days would set my mind at ease.