Had I missed a big piece of news? Riot police with machine guns, shields, steel baseball bats loomed in every direction. And the electric body scanners and bag searches on every street corner (literally) made me wonder if I should get the hell out when I reached Kashgar, my first stop in China.

And every 50km or so on the roads, I was asked to step out of the car to have my passport examined. This could either be a quick affair of 10 minutes, or longer.

This inconvenience meant that the locals didn’t want the hassle of taking me with them and it would be a true test of patience in the coming weeks.

The entire country had a strong air of surveillance – countless cameras overhead, flashing as you drive past and small, semi-concealed posts with red and blue lights flashing to remind you that they might be watching.

In Xinjiang region where I found myself now, just a few years ago, the oppressed people rose up against the authorities, killing a large number of police and now the government has taken extreme measures to prevent a repeat.

Once I had checked in to the only hostel in the city, I had the challenge of getting past the heavily restricted Chinese internet and gaining access to social media to update my blogs and to let people know I had survived the Pamir Highway.

A VPN (a proxy which changes the location of your phone to somewhere outside China) is required to do this, and people told me I should have already downloaded one.

It took a few days to work out how to obtain a VPN while inside the country (someone bluetoothed the program file to me), but in the meantime another traveller let me use their phone. Being offline for 12 days had worried my mother and she was very glad I had managed to get in contact. Goodness knows how she is still sane.

I met another hitchhiker from the UK who had just come the way I was going and warned me about the road ahead. I did not fully appreciate his warning until it was too late.

Once rested, I went to leave for Turpan, the next city worth stopping in. Normally, I would leave late evening to walk out the city and find a place to camp to begin shortly after waking, but in Kashgar, getting caught at this time in the city by the police would not be good. Still, I left in the evening and found a spot between some trees, not wide enough for my tent, but wide enough for me. My tent looked like it had grown between the trees. 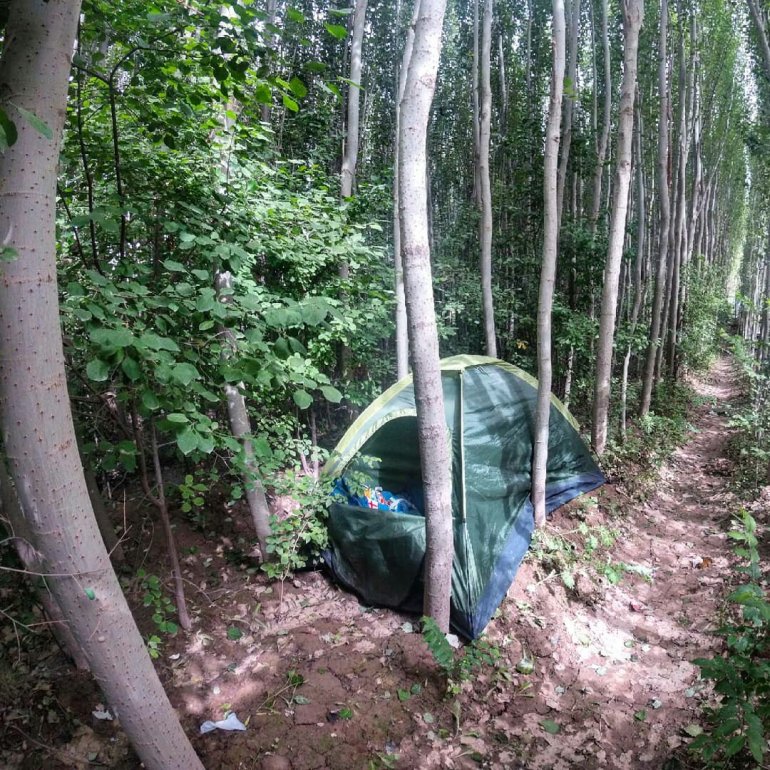 I walked for most of the day before coming to a Police checkpoint and being taken in to the station for questioning.

The police no idea what they were doing, which is why it took four hours. They were kids in costumes, on their phones, laughing with eachother, smoking cigarettes and chatting with me while one of them (they took turns) asked me more serious questions.

The one advantage of this ordeal was one of them handed me her Chinese flag patch to sew on to my backpack.

They would not let me continue though, as it was now evening. Hitchhiking and camping is something they are not familiar with, and they don’t like things like that. They stopped a car to take me to a hotel, which I could not afford. Once they were out of sight, I got out of the car, crawled into a bush and slept for a few hours until sunrise.

The next day I hitched a ride to the first petrol station on the expressway. It felt like being back in Europe, having to hitch between service stations. Traffic was very thin, but all of it was being forced into the services for a police check. This was the same throughout the region.

Surrounding me now was dry, beige desert, with small cratered peaks and dry, dead-looking shrubs. I was glad to be moving between places with water. 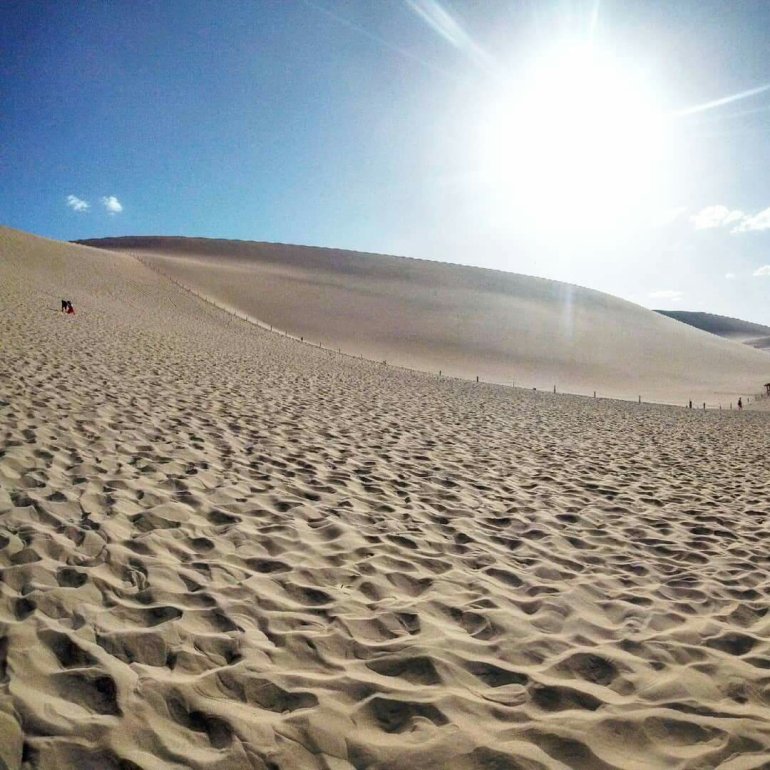 Another ride took me 300km, but to a police checkpoint where they took me out and tried to put me in a taxi. For an hour I waited with them, trying to tell them I couldn’t pay. Eventually, they pretended they didn’t know what I was doing, and I found a truck to Aksu, the next city another 300km away.

He regretted picking me up when we came to the next checkpoint and I had to stop while the officials worked out what to do with me. They let me through after copying down my Russian visa details, thinking it was my passport data page. This was a common occurrence. Notable were the times when one official opened the back page of my passport and examined the stamps for Georgia and Azerbaijan for a few minutes, evidently clueless; another one putting my Russian visa into the passport scanner and having no idea why it was not working; and one thinking than GBR, my country code, indicated I was German and wanted to know why I was lying. It was all fun and games.

Now in Aksu, I felt like I was in a real-life Grand Theft Auto game; I had to outrun the police to get to the outside of the city. Hiding between parked cars while they walked past, snaking down streets they weren’t on, running away while they popped into the station, I lasted a long time. But two on a motorbike caught up with me and tried to get me in a hotel again.

The cheapest was $30 and I didn’t want to pay it. They were just as clueless as their colleagues in Kashgar. The government requires a certain amount of police officers, but does not supply the large number with sufficient training. They were asking me what to do.

‘What will we do if you can’t stay in a hotel?’

‘I will take a train through the night,’ I replied, hoping they would leave me alone, maybe after taking me to the station, and I could find a place to camp.

They drove me to the station and walked me to three of their colleagues. They then took me, staying very close by, through the three bag and body scanners to the ticket office.

How am I going to get through this evening without breaking my rules? I thought.

They walked me to the desk and asked the details of my journey. All I could think to do was to type ‘I have no money for the train. Can you help me?’ into their translation app.

They looked at each other with unsure faces- no real change from their previous expressions – and walked into the corner together.

‘We must call the Immigration Department. Please wait here,’ it said on one of their phones

At what point do I tell the truth? I asked myself.

But 5 minutes later, one of them pulled the train fare out of his own wallet, told me to run through the barrier for the train which was leaving in just a few minutes. I had been given a free 960km ride to Turpan, having begun the evening being told I had to pay for an expensive hotel room. Not bad going!

If you have ever been on the train in China, you will know how it feels to be an alien. Whenever I looked up, I was being stared at. Behind me, nothing but ice-cold gazes. Going into and out of the toilet, it felt like I had done something wrong to everyone on the train. I managed to get some sleep, but every time I opened my eyes, the couple opposite me were staring too. The Chinese don’t seem to think staring is rude and through the whole country, I would feel like an animal on display. People took secret photos with me, and some not so secretly – one man even took his phone out and put it in my face.

Just before the train pulled into the station, a police officer on the train took me to one side to work out if he had to deport me.

‘You said you have no money, is this true?’ he queried.

‘Currently, yes. But my mother controls my money, sending me a small amount every week,’ I lied.

‘And how do you travel across China?’

‘By train, sometimes by bus,’ I told him like a sociopath.

He seemed satisfied with those answers and the ones that followed. But it almost fell apart when I asked him if I could get some breakfast on the train.

‘But you have no money?’ he queried.

‘Is it not included in the ticket price?’ I returned like a goal keeper saving a penalty.

Turpan station came into view and I left behind the events of the last 24 hours. The station had had been built 60km away from the city itself, but it was an easy hitch there and my driver took me straight to the hostel.